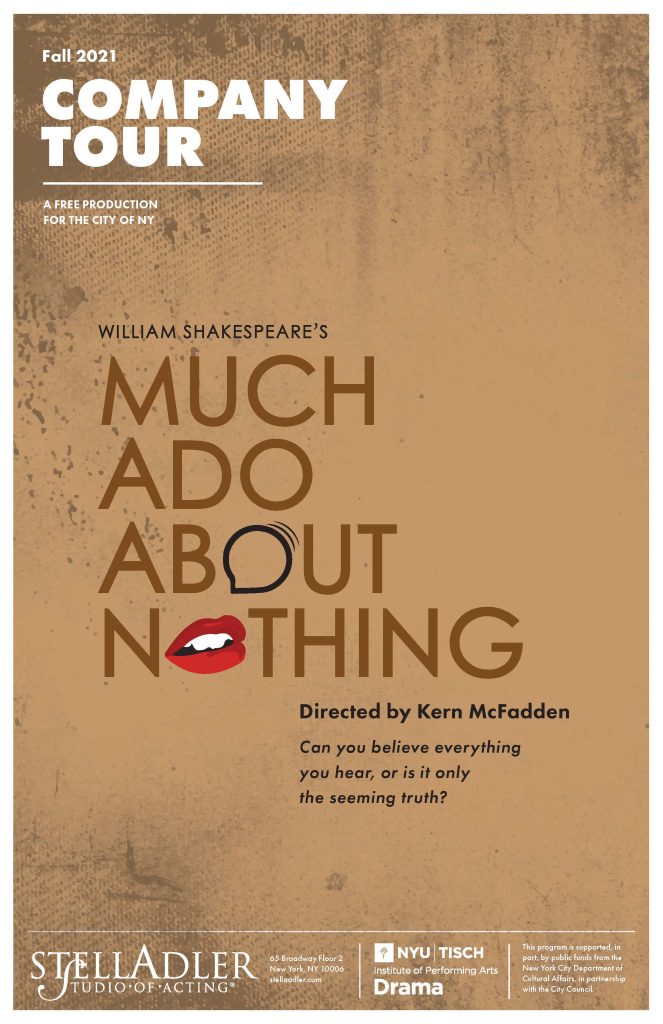 Company Tour
A Free Production for the City of New York

Much Ado About Nothing by William Shakespeare
Directed by Kern McFadden

The studio is pleased to announce the 9th annual Company Tour. This year, most community partners and schools still have COVID safety protocol that prevent in-person visitors. While we cannot come inside community facilities, we’re offering a free virtual touring production of a Shakespeare play. A pre-recorded, 60-minute version of Much Ado About Nothing is performed by advanced-level NYU students. There is an opportunity for those who are interested to have a live Zoom interaction with the actors. This is a great opportunity for teachers who:

There are several options for how community partners might make use of this free resource. We are happy to be flexible in the interest of serving as many people as possible in a way that makes sense for them. If you are interested or if you have any questions at all, please contact Nina Capelli, Director of Cultural Programming ( nina@stellaadler.com) and / or Addison Heeran, Interim Production Manager (addison@stellaadler.com.)

Click here to watch Much Ado on You Tube.
View Program Here
“I just want to thank you immensely for sending the team of professional actors. They were awesome!  My students were enraptured during the performance. For most of them it was their first Shakespeare production. I’m looking forward to continuing to work with you in the future. Thanks for considering us!”

The Company Tour is a free, 60-minute, bare-bones touring production of a classical play with a focus on performing for under-served communities. Since 2013, the Company Tour has reached over 7,000 New Yorkers and collaborated with over 50 community organizations including schools, community, cultural, rehabilitation and senior centers in all five boroughs. Through post-show community discussions, performers and audience have an opportunity to connect. Now, since the pandemic has limited our ability to travel and connect in-person, the tour is available virtually.
The following are offered to community partners for free:
If you use any of these resources, please take a moment to give us your feedback so we can continue to provide free theater for the community.